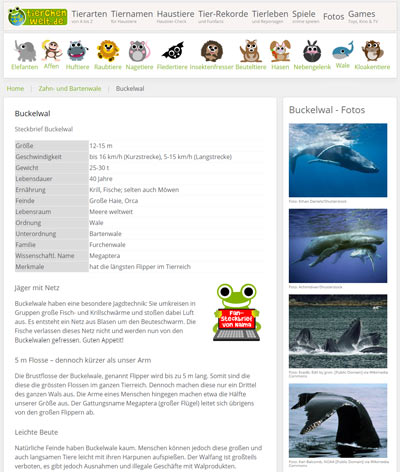 • Who Wants To Be a Millionaire?

On 02.16.15, the German edition of animalfunfacts.net (tierchenwelt.de) helped a contestant on the German version of “Who Wants To Be a Millionaire?” to win 64,000 euro.

“I know the answer,” said Rimvydas Kisevicius as soon as he saw the 64,000 euro question. Even though the question definitely wasn’t easy. It was: “Who uses bubble nets as a creative way to catch prey?” The answer: “humpback whales” - and Kisevicius was even able to explain how they used their “bubble nets”.

After the question, the contestant explained that he’d read the answer on a “great website” called “animalfunfacts.net”. He had found out lots more interesting facts with his daughter, and even laughed at funny animal names, like the “velvety fruit-eating bat”.

This shows that children and adults don’t just learn things on animalfunfacts.net but also retain the knowledge and have fun doing it. And on 02.16.15, this knowledge was worth a lot of money. You can find the episode in the media archive on RTL NOW.