animalfunfacts.net offers animal profiles, animal records and animal knowledge for school and homework, all about pets and a huge pet name database.

Edible Dormouse
The dormouse is a really cute rodent! Soon it will enter its well deserved hibernation phase!

Forest Dung Beetle
The busy little forest dung beetle is easy to spot at this time of the year. You can even hear it! Here's the profile.

Ladybug
Ladybugs are always red and have black dots on them. Wait. There are yellow ones and even ladybugs without dots!

Brown Bear
Do brown bears climb? How do they hibernate? What are they eating? Are they dangerous? Check the profile!

Echidna
Is this a kind of hedgehog? Is it true that the Echdina lays eggs? What does this animal eat and why does it have such a long nose?

Hedgehog
In spring hedgehogs awake from their hibernation. Did you know that there are 24 types of hedgehogs?

Toad Migration
In spring time frogs and toads awake from their torpor and start to set out. But where are they off to and why?

Red Fox
Did you know that foxes use the Earth's magnetic field when hunting? Find out about its magnetic sense!

Bald Eagle
Bald eagles grab fish with their feet - while flying. Learn more about these birds of prey!

Biodiversity
What is biological diversity? Why is it so important that there are lots of different animals, habitats and landscapes?

The polar bear is one of the biggest bears in the world. Only the brown bear and the Kodiak bear in Alaska reach a similar size.

Actually, the Polar Bear is not White

Although the coat of the polar bear appears to be white, its hairs are actually transparent and hollow inside. There is a good reason for this: The warmth of the sunlight can directly reach the skin, which is actually black to optimally absorb the heat. To clean their coat, polar bears simply wallow in the snow.

To achieve this, they lie down in the snow or on the ice on their backs and lift their feet up in the air. This allows them to cool down the largest possible part of their body surface. They lie down again and again, even when only walking short distances. Sometimes they even jump into the icy (!) waters to refresh themselves.

The Polar Bear's Sense of Smell - Smells Like Seals

Polar bears cannot swim faster than 10 km/h, but they are able to cover distances of 62 miles (100 km) without pausing.

Do Polar Bears Live in Caves?

Many people think that polar bears live in caves. Yet, only female polar bears withdraw into caves to give birth to and protect their babies.

After the mating season it takes about 8 months until the little polar bear babies come into the world. About one month before giving birth, the female polar bear digs a cave as a retreat. Normally there are 1-4 little bears weighing about 1.1 lb (0.5 kg) at birth. At first they are still blind and deaf. After 4 months they are ready to leave their cave.

Two Birds With One Stone ...

Female polar bears combine their pregnancy with their winter rest.

All polar bears are „left-pawed“.

Picture of the Day 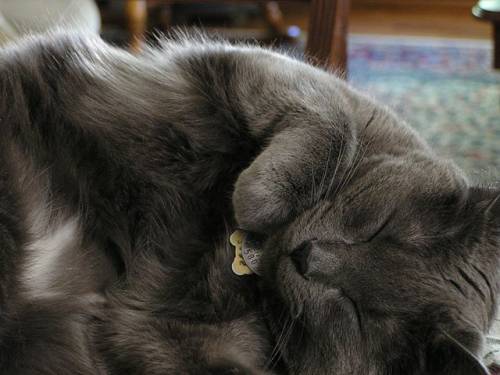 Migratory Bird Day - May 08
This day is dedicated to the migratory birds. Do you want to know which other animals are migrating? Check out the animals, that travel the furthest.

World Turtle Day - May 23
Learn all about turtles like the aldabra tortoise, galápagos tortoise, chelydridae and loggerhead sea turtle. We have info about weird turtles and weird turtle shells.

All About Amphibians
Amphbians are cold-blooded. What exactly does that mean? And what is a metamorphosis?

The Strongest Animals
Do you know the Which is the strongest animal? The rhino? The elephant? Let's check this video!

Colorful Animals
When you try to hide, striking colors are not a good idea. Why are animals brightly colored?

animalfunfacts.net is the English edition of tierchenwelt.de.

Awards and seals of approval:

animalfunfacts.net is supported by

You are looking for a pet? Here you will find nearly 100 profiles of family-friendly dog breeds, cat breeds, hamsters, guinea pigs and bird breeds.

Whether sweet, smart, funny or in another language - all names are sorted by category, so you can quickly find the right name for your pet.

Here you will find facts about mammals, birds, amphibians, reptiles, fish, insects, spiders and invertebrates. You'll also learn what animals are and how they differ from plants.

90 Coloring Pages - printable or for coloring online. Test your knowledge in Animal Quizzes. If you want to find out which kind of pet would suit you go ahead and take a personality test.

Which are the biggest, fastest, heaviest etc.?

More than 250 records sorted by category. You'll also learn how to distinguish animals that look alike.

Are there any toxic mammals? Can animals count? How do chameleons change their color? How do animals breathe? Exciting articles and simple explanations!