Red, orange, yellow, blue, green – the bright colors of the poison dart frog already seem to suggest: "I am not edible, beware, I am poisonous!" And it is poisonous indeed. Its convulsant "Batrachotoxin" paralyzes muscles and the respiratory system. 0,002 mg of the poison per kg body weight can kill a human within 20 minutes time. However, the poison dart frog doesn't need the poison to kill other animals. It uses it for defense purposes - to avoid being eaten by predators.

Where Does The Name „Poison Dart Frog“ Come From?

Who would have thought that the frog’s poison could also be useful? In Columbia, the native Chocó tribe uses it for hunting with blowpipes. A little drop is enough to kill birds and small mammals.

The Poison Dart Frog Has Many Names

There are several names for the poison dart frog, such as dart-poison frog, poison frog or poison arrow frog. The frog’s scientific name (dendrobates) indicates an animal “climbing about in trees”.

Can You Die From Touching a Poison Dart Frog?

This depends on the actual frog species. Only three of more than 175 species are dangerous to life and you definitely should not touch them at all:

If you are not living in Columbia you do not need to be afraid of these three frogs because they live only there. The other species are not life-endangering but can cause fever, sickness, and gastro-intestinal poisoning if the poison finds its way into open wounds or gets in touch with mucous membranes (e.g. eyes, mouth).

How Can You Extract The Poison Without Getting Poisoned?

The members of the Chocó tribe wrap leaves around the frogs, skewer them with a stick and “heat” them over a fire while putting a bowl under it to collect their excretions resp. poison. The natives then soak their arrows with the liquid. But why don’t they die after eating the meat of animals which were killed with arrow poison? They fry the meat until it is well-done. The poison becomes harmless at a certain temperature.

The poison of one single frog of the species Phyllobates terribilis is enough to prepare 30-50 arrows. The poison can be used for up to one year.

Why Are Poison Dart Frogs Poisonous?

Poison dart frogs love to eat ants, termites, millipedes and bugs. The biochemical substances are collected in specific glands and make up the poison. If you collect “wild” posion dart frogs and feed them with different food, they will lose their toxicity.

Why don't poison dart frogs die from their own poison? Until recently, scientists thought a modified amino acid would make the animals immune to the toxin. Incidentally, amino acids are the building blocks of proteins, but not acids in the sense of a corrosive acid. In 2021, however, it was found that this guess was wrong. At the moment it is assumed that the animals absorb and neutralize the poison inside their bodies like with a sponge.

Most frogs are nocturnal animals. Poison dart frogs are active during the day when their bright colors can be seen best. They are sociable and live together in small groups.

Do Poison Dart Frogs Have Enemies?

The only natural enemy of the poison dart frog is a snake called Leimadophis epinephelus. It is not immune but resistant against the frog’s poison.

Are There Poison Dart Frogs on Madagascar?

Poison dart frogs are often confused with the golden frog, which is just as small and colorful but less poisonous and only lives in Madagascar.

Poison Dart Frogs Help in the Development of Medicines

Scientists do research on the use of the poison of the phantasmal poison frog for medical purposes and have developed a new painkiller. It is 200 times stronger than morphine and does not have its side-effects. There is also research going on regarding the use in muscle relaxants and in drugs for the treatment of diseases of the heart. 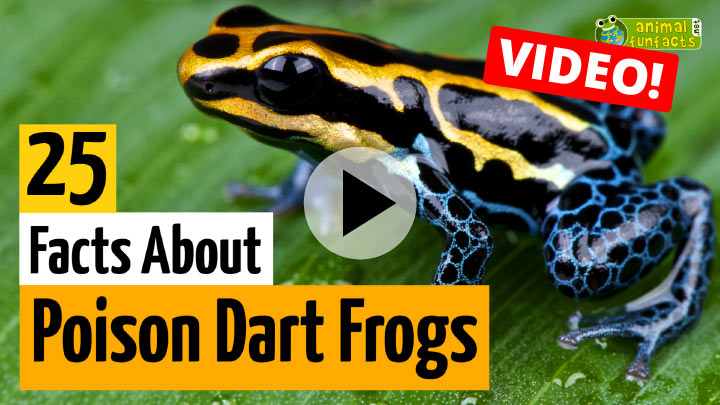