The beaver is the world`s second largest rodent after the capybara. There is the European and the Canadian beaver. Beavers inhabit the banks of standing and flowing waters, where they build a lodge (for living and sleeeping) and dams (for thawing water).

What is The Beaver's Favourite Food?

Beavers feed on tree bark as well as on water and riparian plants.

Which Are the Beaver's Enemies?

Why Are Beaver Teeth Yellow or even Orange?

Beavers do not brush their teeth. Ok, ok, that was a joke! Beavers have yellow or even orange teeth because their food, which is the trees and their bark, contains a lot of iron. This causes the enamel to be orange and super hard - which is very important for the beaver. 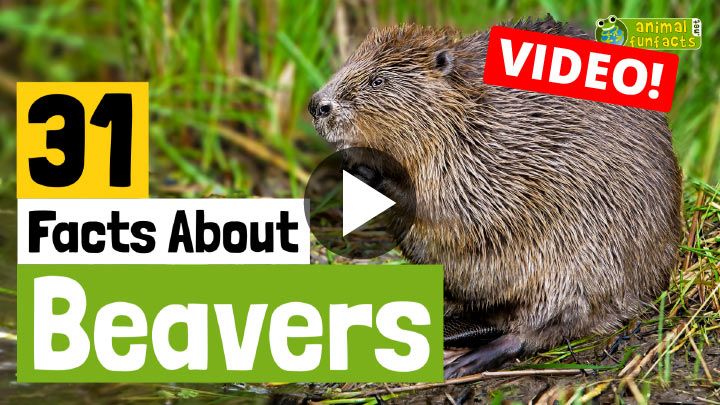 Beavers are gifted architects. For their dams and lodges they cut down tree trunks up to 3.2 ft (1 m) thick. They use their front teeth and their lower jaw to gnaw them off at the lower end. In the end, the shape of the tree resembles an hourglass and in the middle it is as thin as a tooth pick when it falls down noisily.

Afterwards the cut down tree is expertly cut up into handy little logs and transported to the beaver’s lodge. The beaver uses the material to repair its “home” and to dam up the water.

A beaver's lodge has several pipes for different puposes. There are food tunnels, escape tunnels, and tunnels for playing.

What is The Purpose of Those Dams?

The beaver lodge is the rodent’s living room, the fridge and a cosy place to sleep. Lynxes, wolves, bears or poaching dogs are not welcome there of course. Therefore the entrance is always UNDER water. In order to keep the water line at the same level all the time, the beaver constructs a dam.

Humans do not necessarily love beavers as they modify the shorelines so that adjacent areas become wetlands which then cannot be used as planned. Roads could also be washed out and damaged. On the other hand, the beaver is extremely important to maintain a healthy eco system.

Why Are Beaver Dams Important?

With their dams the beavers create an important habitat for water plants, fish, insects and birds. They also stabilize the shoreline and prevent sand from filling the river. The dammed-up waters raise the groundwater level and alleviate the flood risk.

In 2007 an extraordinarily large beaver dam was discovered in the Wood Buffalo National Park in Alberta (Canada). It is 2,788 ft (850 m) long. Probably several generations of beavers have been working on it since 1970.

The beaver has an incredibly thick coat. Up to 23,000 fine hairs grow on one square centimeter of its skin, compared to the 600 on our skin. The coat protects the beaver from cold water. Some vain people also wear beaver-fur hats to protect their ears. The fur is one of the reasons why beavers have almost been exterminated. It is still an incredibly rare experience to come across a beaver, but fortunately the number of those animals is increasing again.

The Beaver is Actually a Fish, Isn’t It?

In the Middle Ages, beavers often were categorized as fish because of their webbed feet, scaly tails and their habitat, as people were not allowed to eat meat during fasting periods.

Is the Beaver an Endangered Species?

According to the IUCN (International Union for Conservation) beavers are no endangered species. Nevertheless, the European beaver is a particularly protected species in Germany and must not be hunted.