Hummingbirds are small birds with a very exeptional, unique ability: they can fly backwards.

Some people eat while walking, the hummingbird almost exclusively eats while flying. While hovering in the air, it drinks from the calyx of a flower. With its long, needle-like bill it gets deep into a flower. It looks like the hummingbird uses its bill like a drinking straw to suck up the nectar. In fact, the hummingbird sticks out its tongue and dips it into the nectar. This happens very quickly, about 15-20 times per second. Every time a little bit of nectar becomes trapped within the tongue and when the bird rectracts its tongue the nectar is drawn up. The tongue acts like a tiny pump.

Hummingbirds flap their wings about 40-50 times per second. The wings are so flexible that the birds can fly sideways, backwards and „on the spot“. 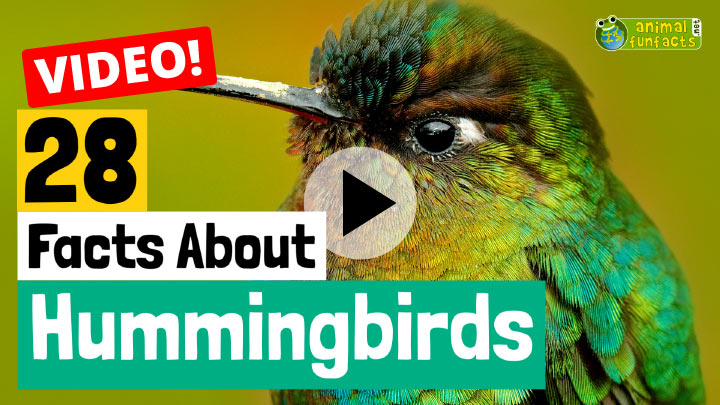 They Drink Five times as Much as Their Own Body Weight

Hummingbirds flap their wings so fast that we cannot see them anymore. This is very exhausting and energy-consuming. Therefore, hummingbirds have to take in large amounts of sugar with the nectar they drink from flowers (the nectar consists of 30 % sugar and 70 % water). They slobber five times the weight of their bodies of the sweet “fuel” every day. Fortunately their kidneys work very well. Other animals would die if they tried to drink that much. Their kidneys would not be able to process such large amounts of liquid at once.

Hummingbirds Have an Iridescent Plumage

The bright plumage of most hummingbirds has a dazzling, metallic gleam. Depending on the incidence of light, the feathers glimmer in slightly different color shades. This is called light interference (= the overlapping of light waves). You can watch the effect when drops of oil spread on a water surface, or when light falls on a CD in a specific angle so that you can perceive the colorful gleam.

Hummingbirds Adapt to the Cold

How can a little bird like the hummingbird withstand cold temperatures? It uses a trick: When it is getting cold during the night, it slows down its metabolism, which helps it to maintain an even body temperature. It enters a so called state of torpor. More infos on that in our broad-tailed hummingbird profile.

The Biggest and the Smallest

Salamanders breathe through their skin.