Video: All About Insects and Arachnids

Why do insects pupate? How does insect metamorphosis work? Spiders are insects, too, right? Do insects actually have a skeleton? Learn more about these fascinating animals in our video about insects and arachnids". 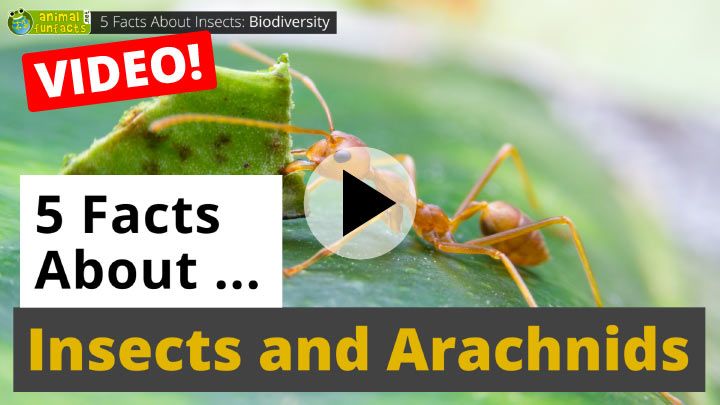 1. Insects and Arachnids Do Not Have a Skeleton

Find out more:
The 15 Weirdest Insects in the World
How do insects breathe?

Butterflies first spend a part of their lifetime as caterpillars. After having eaten enough they pupate. Eventually, the butterfly emerges from the so-called cocoon. Yet, not all insects pupate and not all of them undergo such an impressive metamorphosis like the butterflies. Grasshopper larvae, for example, shed their skin several times until they are finally grown up. Magicicadas have the longest development time of all insects. It can take up to 17 years until the larva has grown up! The term metamorphosis means the the development of a larva into an adult animal. Some animals undergoing a metamorphosis look entirely different afterwards, e.g. caterpillars after developing into butterflies.

3. Insects are the Most Diverse Kind of Animals

Additional info:
Spider silk is thinner than human hair. Yet it is five times stronger than steel!

5. Arachnids do Not Have Compound Eyes

The insect eye consists of a whole set of little individual eyes – they are called compound eyes. Every single eye sees a little piece of the surroundings. Together they add up to the complete picture. Butterflies have about 6,000 individual eyes, dragon flies even 25,000 to 30,000, which enable them to see in all directions. “Facette” is a French term and means "small rhombus". Arachnids do not have compound eyes. They have six to eight eye spots, so called ocellis. But this does not enable them to see very well. Generally, they only perceive light and dark. Their sense of touch is much more important to them.

Insects do not have a skeleton. They undergo a metamorphosis and are the world’s most diverse kind of animals. They have six legs and compound eyes.

Arachnids are no insects. They have eight legs and six to eight so-called ocelli.