Why should only humans set records? In this video you will find out about amazing records that are set up by animals. There are racing sheep, surfing dogs, skating goats, fish dancing limbo and rabbits doing high jump. Have fun watching! 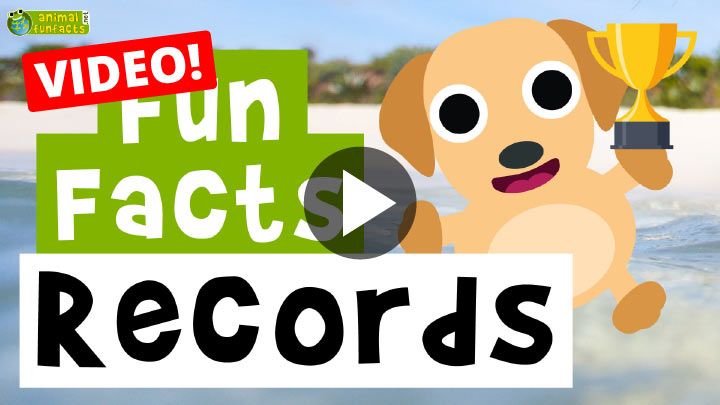 11. A Sheep Named Lamborghini Holds the Record for "Most Races Won by a Sheep"

A sheep with the name of a sports car has to be fast! It won 165 races out of 179 in one season. Lamborghini even had a jockey. But not a human one. On his back sat a plush pig named Del Trotter. Meanwhile, Lamborghini enjoys his retirement on a beautiful large pasture.

10. A Dog named "Monkey" Has a Special Talent

He holds the world record for balancing 26 dog biscuits. On the nose! With the prospect of so many delicacies, this trick must be especially enjoyable! Meet 32 friendly dog breeds - in our pet section!

9. Bertie is the Fastest Turtle in the World

Here you can learn more about turtles and tortoises.

8. How Many Balls Can a Dog Catch with its Paws in One Minute?

The world record is 14 balls and was set up by the Japanese beagle Purin.

7. "Zac the Macaw" is a Master at Opening Bottles

The hyacinth macaw manages to open 35 bottles in one minute by levering the metal cap with his beak.

Everyone can skate! Oh yes? While skating some members of the animalfunfacts-staff have fallen pretty nasty and rubbed their knees sore. Goats do better! At least, Happie. She set a world record in 2012 by skating 118 feet (36 meters). It took her 25 seconds to do that. That is confirmed.

5. Fish "Albert Einstein" Holds the Record for Performing the Most Tricks

It can fetch, play football, eat from hand, swim through tires and tunnels, even limbo! Limbo is a dance game in which you pass under a horizontally held pole. Everytime the bar is lowered slightly and one must not lean forward or turn sideways. You must bend backwards, the back facing the floor. Albert Einstein is a Calico fantail goldfish and was 3 years old at the time of the world record. Click here for the goldfish-animal fact file!

The dog holds the world record for the longest wave surfed by a dog. She covered a distance of 351.7 feet (107.2 meters)!

3. Cat Merlin Holds the Record for the Loudest Purr

He purrs as loud as a lawn mower. Which animals also make loud noises? Meet the loudest animal in the world!

We know dog agility. But rabbit agility? This extraordinary sport comes from Denmark and is called Kaninhop. Rabbits jump over obstacles in a course. The world record is from 1997 and therefore a bit older - but unbeaten so far! The height of 39.2 inch (99.5 cm) was confirmed by the Guinness Book of Records. By the way: The name of the rabbit is Mimrelunds Tösen and it has a funny nickname: "The Lassie of Quivering Grove". More information about these animals in the rabbit fact sheet.

1. Blackie Holds the Record for the Wealthiest Cat

The cat inherited 12.5 million Dollars (more than 10 million Euros) from her owner. The antiquarian, refusing to pass on money to his family, stated in his will that he mainly wants to bequeath Blackie and three charities to cats. More about cats in our pet section!

Pigeons can recognize people in photographs.