Video: How Do Animals Survive in the Arctic?

How do animals survive in the icy Arctic? How do they protect themselves from freezing? How do they find food? What actually is a tundra? You'll find out in our knowledge video "Animals in the Arctic"! 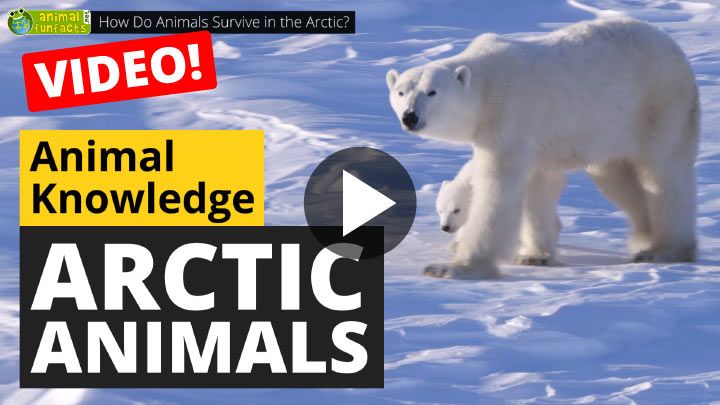 In the Arctic, temperatures drop as low as -58 degrees Fahrenheit (-50 degrees Celsius) during the winter. Isn’t it much too cold to live there? However, some animals still have their home there. But wait! Where exactly is the Arctic? The Arctic is an extremely cold area at the north pole, the northern “end” of the world. “Arctic” is a Greek term, by the way and means “bear”.

Find out more:
9 Animals that Use Awesome Tricks to Survive the Winter

How do Animals Survive in the Arctic?

The polar bear has a thick layer of fat that keeps the cold away. But that's not all. The hairs in its dense fur are hollow inside and are particularly good at storing the heat of the sun. The polar bear is the tallest animal in the Arctic region. Its coat is actually transparent.

The arctic fox also has a super dense fur. It has got the warmest fur of all animals! 70 % of it is made up of a soft undercoat. The muskox has an extremely long and shaggy outer coat, but it is primarily its wooly undercoat that keeps it warm. It is eight times as warm as sheep’s wool.

Reindeers have a special trick against the cold: They feed on moss which contains a particular substance that protects their blood from freezing. They also have special, very soft hooves that broaden when touching the ground. This prevents them from sinking in on snowy surfaces.

Only 48 mammal species live in the Arctic region, but there are quite a lot of birds. The snowy owl. for instance. Its warm plumage even covers its feet. Another one is the great gray owl. Yet, at the beginning of winter, most birds move south – like the Arctic tern, the puffin and the Tundra swan.

Life in the Tundra

Most animals don’t live on the ice or in the snow, but in the tundra, a barren landscape with bushes and moss. During the summer temperatures rise up to 54 degrees Celsius (12 degrees Celsius), but the ground remains frozen the entire year. This is the reason why there are no trees in the tundra – their roots would die from cold. The word tundra comes from the Finnish word "tunturi". It means "treeless landscape". In summer, the sun never sets in the tundra and in winter it never rises. The soil in the tundra is a so-called "permafrost".

Hey, what about the penguins? Why would polar bears and penguins never meet? The polar bear lives in the Arctic and the penguin in the Antarctic region.

Adapting to a Cold Habitat

During the winter, many animals have a white fur or a white plumage to be well camouflaged in the snow. During the summer the snow melts and the brown soil comes to the surface. Then the animals change their color. The Arctic hare, the stoat and the reindeer lose their white coat.

How do animals keep warm in the Arctic? They have a thick layer of fat, a wooly coat, or a dense plumage. The animals of the Arctic and the tundra live in caves, move to the south when the winter approaches or they hibernate.

Video: Animals in the Arctic - Roundup!

The armadillo’s “armor” is made from soft, leathery skin.