Which animals live in the rainforest? Is the tapir a mix of wild boar and anteater? And what kind of animal actually is the okapi? You'll find out in our knowledge video "Animals in the Rainforest"! 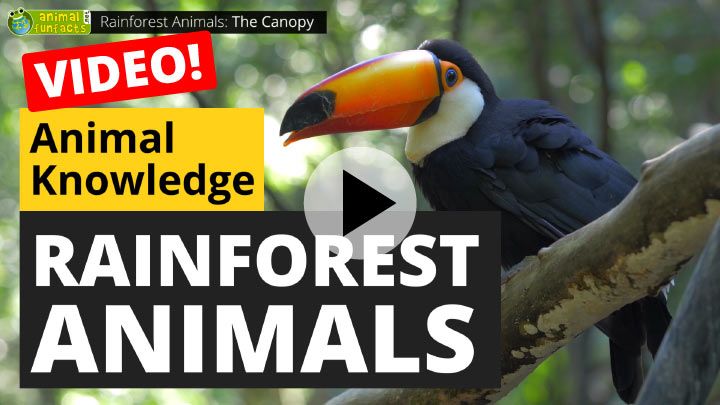 Tropical rainforests are dense forests with high trees. It is very warm and sticky the whole year through, and there are frequent cloudbursts with heavy rain. Did you know that more than half of all animal and plant species live in the rainforest? It is the world’s most biodiverse habitat. Rainforests can be found in many regions near the equator. You can imagine the equator as a line marking the border between the northern and the southern hemisphere. Rainforests exist in Africa, Asia, Australia, Central America and South America.

In the tropical rainforest, there are several „floors“ just like in a house! The forest floor is the ground floor.. It consists of roots, soil and leaves. The plants do not get much sunlight and therefore do not grow very densely. This is mainly the habitat of insects, amphibians and reptiles.

The tapir is one of the few bigger mammals living there. It looks like a mix of wild boar and anteater. However, it is not related to them, but with horses and rhinos. The okapi also lives in the rainforest. It is a kind of forest giraffe, feeding on leaves and buds. The forest floor is also the home of pigmy hippos, gorillas, and tigers.

Little plants, ferns, vines and shrubs grow in the understory of a rainforest. Here you find animals that are good at climbing – such as the chameleon. With its feet it can grasp branches and it also has a prehensile tail to hold on to them tightly. Due to its slow movements it can easily be mistaken for a leaf. The squirrel monkey is not able to use its tail to hold on branches. It serves as a kind of balancing pole instead. The coati feeds on insects, spiders, and fruit. It enjoys its life in the trees so much that it even stays up there at night and actually sleeps on a branch.

The canopy is the highest habitat in the tropical rainforest. It is about 100-150 ft (30-45 m) above the ground. 80 % of the rainforest animals live here.A particularly cute rainforst bird is the toucan. Although its bill appears to be extremely heavy, it is very light because it is hollow inside. With its sharp edges the toucan cracks fruit and nuts.

Who would have thought that large and heavy apes such as the orangutan live in trees? They are rarely seen on the ground and spend most of their time up in the canopy.

The sloth almost spends its entire life up in the trees. Its claws resemble meat hooks and save the sloth from falling down. As the sloth always hangs on branches upside down, they have their fur parting on the belly instead of its head and back.

And what’s above the canopy? The trees in the rainforest can get up to 100 m high! This is the habitat of animals such as the crowned eagle, the colobus monkey, and the fruitbat.

Additional info:
The jungle giants are among the most valuable treasures of the rainforest. They are cleared for the production of wood, paper, and furniture and replaced by plantations with oil palms, sugar cane, and soy. This does not only harm the rainforest. Its trees produce 20 % of the entire oxygen on earth. Therefore, this affects us all.

There are three habitats in the rainforest: There is the forest floor, the understory, and the canopy. Each of them is the home of another group of animals.