Video: The Strongest Animals in the World

Which is the strongest animal? The elephant? The hippo? The great white shark? Meet the animals with the strongest muscles when it comes to pulling, carrying, jumping, climbing and biting! Hit the play button to find out! 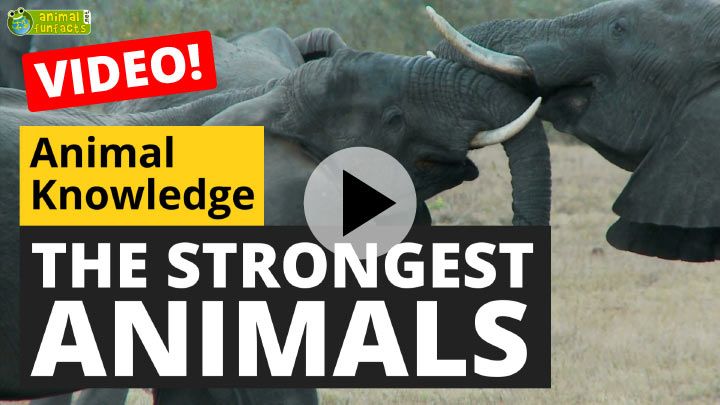 Animals that Are Best at Pulling and Lifting

Elephants do not only feed on leaves and grass, but also on twigs, branches and roots. They use their trunk to reach them. With their trunk they can dig, pull, push – and lift up to 600 lb (300 kg). The leafcutter ant can carry leaves that are 50 times as heavy as themselves – this would be just like an adult human carrying 60 fridges above his head.

Sea eagles do not only have a very sharp bill, their talons are sharp as razorblades, too. But what is really stunning: Some eagles can carry four times their own weight when flying!

The strongest animal in the world is the ... dung beetle! At least in relation to the size of its body. With its strong hind legs it rolls little dung balls. Those can be more than a 1,000 times heavier than the beetle itself. This would be like an adult human pushing 80 cars.

Look at the wide leaps of thesnowshoe hare macht! It can jump distances of 10 ft (3 m) when trying to escape from a predator. The great grey kangaroo has got even longer and stronger legs. They are just like spiral springs that catapult the kangaroo forward. It can cover a distance of more than 40 ft (13 m) in one leap! Which animals are awesome at climbing? The jaguar can climb trees with prey that is twice as heavy as itself. Black bears also like to climb. The leopard can even climb trees that are up to 50 ft (15 m) high.

The bill of the hyacinth macaw is so sharp and strong that it can cut a broomstick into two parts. Usually, the macaw likes it most to crack macadamia and coconuts with it. Even though hippos mostly appear to be good-natured and harmless – they are extremely strong and have extremely strong jaws. They only feed on plants, but their bite is stronger than that of a grizzly bear.

The crocodile is one of the two animals with the strongest bite force! With its powerful jaws it quickly seizes its prey and holds it tight. Even big and sturdy animals such as gnus, zebras and little hippos are unable to free themselves. Ok. Now let's got diving! In the ocean lives an animal with a bite force that almost matches up to that of crocodiles: the white shark!

By the way: There are small animals with a surprisingly strong bite force as well! The Tasmanian devil is not much bigger and heavier than a cat. It mainly feeds on dead animals and even eats their bones. In relation to the size of its body, it has the strongest jaws of all mammals.

Find out more:
Top 10 Animals Most People are Scared of (and are not that dangerous sometimes)

The strongest animals are elephants, leaf-cutting ants and dung beetles. Snowshoe hares, kangaroos, black bears, leopards and jaguars are the best when it comes to leaping and climbing. Hyacinth macaws, hippos, grizzly bears, crocodiles, and white sharks have the strongest bite force.