What kind of symbiotic relationships are there? What are the advantages? Wait - what does the word symbiosis mean anyway? In this video you will meet animals that live together although they do not belong to the same species. We will also explain all foreign terms, of course! 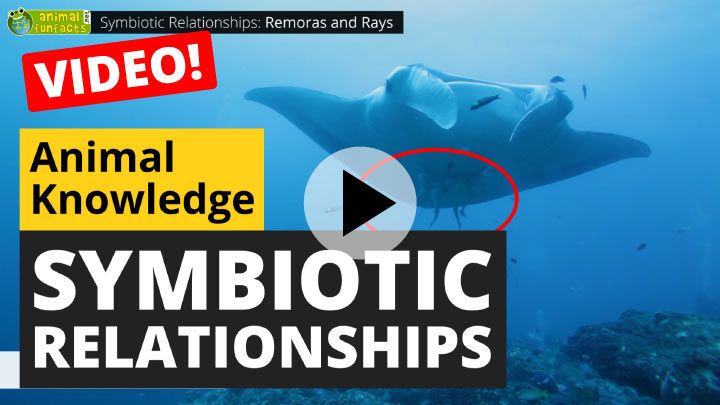 Often, many different animals live closely together. If both animal species benefit from this it is called a symbiosis. Symbiosis means “living together” (from Greek “syn” = “together” and “bios” = “live”).

Oxpeckers Oxpeckers are little birds feeding on parasites such as flies, ticks, worms, and lice. You can often see them sitting on big animals such as zebras, buffalos, giraffes and wildebeests . They are pecking at the parasites that settle down in the skin of the hoofed animals. The big animals wouldn't get rid of them by themselves.

The cattle egret also likes to sit on the back of hoofed animals. From there it can easily spot approaching predators. Then it becomes anxious and warns the animal on which it is sitting. Of course, there is second reason why the cattle egret loves hoofed animals: Like the oxpecker it enjoys pecking at the parasites hidden in their coat.

What does the boxer crab have on its hands? Actually, little sea anemones are growing on them! When touched, their tentacles excrete a burning poisonous substance. And this is exactly what the boxer crab wants. When it has to defend itself it holds the anemones like boxing gloves towards its enemies. How does the sea anemone benefit from this? Whenever the boxer crab eats something, the tiny leftovers directly float into the anemone’s mouth. .

Additional info:
Sea anemones are so-called anthozoans. The relationship between clownfish and sea anemone is quite similar.The poisonous tentacles of the anemone do not harm the clownfish. When looking for protection, the clownfish quickly hides between the tentacles. In return, the anemone can feed on the clownfish’s leftovers.

Oh no! The moray is going to eat the shrimp!! ..... Really? The moray does not eat the shrimp as it needs the animal to get rid of parasites and dead skin. This is why the little crustacean is called cleaner shrimp. Many fish like to use its cleaning services.

The remora uses its headplate to suck onto sharks, rays, and sea turtles. While floating along as if using a taxi service, the fish gets its share of the other animal’s food and removes parasites in return.

Another nice example for symbiosis is the relationship between the pistol shrimp and the goby. In order to hide from its enemies, the pistol shrimp digs caves under water. At first, the goby next to it appears to be an unwelcome guest. Yet, the opposite is true. The goby is like a doorkeeper for the nearly blind pistol shrimp. The goby has very good eyesight and warns the pistol shrimp when there is danger ahead. In return, it benefits from a safe home and protection.

Lice! A nightmare for every gardener! Ants use them as a kind of juice shop. They enjoy the sweet honeydew the lice leave behind after sucking on the plants. The ants protect the lice from other insects and spiders in return.

Symbiosis is when different animal species live together. Both species benefit from this relationship. They protect each other from dangers, share their food and help each other to get rid of parasites.

Pandas pee standing upside down to get their scent as high as possible.