Video: How Do Animals Survive in the Desert?

How do animals survive in the desert? How do they protect themselves from the heat and how do they find enough water? Are there animals that do not have to drink at all? In this video, you'll get the answers to all these questions. 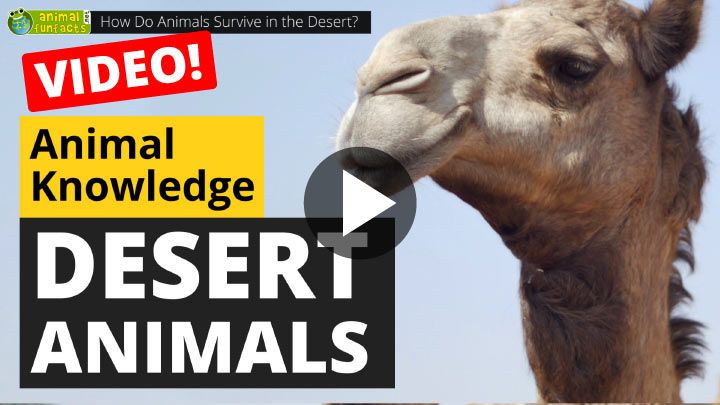 The terms „Sahara“ and „Gobi“ both mean „desert“ in the languages of the local people. The largest deserts are the Sahara in North Africa, the Gobi Desert in Asia, and the Kalahari Desert in the South of Africa. In the extremely dry and hot sand deserts it is nearly impossible to find some food. Therefore, many animals live on the rim of those deserts. Desert grass, cactuses, agaves, and thornbushes grow there.

How do Animals Survive in the Desert?

Camles are perfectly adapted to the life in the desert. This is why they are often called “ships of the desert”. They can spend weeks without any water and food. Their feet are so soft that they broaden when touching the ground. This helps them not to sink too deeply into the sand. Not even a sandstorm affects them, as hairs in their ears and their eyelashes keep away sand and dust. Camels are also able to close their nostrils.

Find out more:
Camel or Dromedary - What’s the Difference?

This ground squirrel lives in the deserts of Africa. It is active during the day when the desert ground can reach temperatures of up to 140 degrees Fahrenheit (62 degrees Celsius). But the ground squirrel has an ingenious trick: It provides itself some shade with its bushy tail. Wherever it goes: It has its sun shade ready-to-use!

Meerkats are also active during the day. They rely on their eyesight when it comes to spotting predators from afar. In order to get the best view they stand on their hind legs and stretch themselves upward. The bright sunlight does not bother them at all. The black shades around their eyes help to protect the animals from being dazzled – they are just like sunglasses.

What does the snake do here? It seems to be floating above the desert sand. And this is, what it – almost – does. With its sideward movements, the snake can better control its way across the loose sand and hardly has to touch the hot ground.

The thorny devil has an brilliant trick to get some water. During the night dew condenses on their bodies. It forms little drops of water on the animal’s scales to directly enter the thorny devil’s mouth. Just like a rain gutter.

There are also elephants living in the desert. They have several tricks to cope with the heat. When finding a waterhole, they sprinkle themselves with mud. This has the same effect as a sunblocker and helps them not to get sunburnt. The mud is also refreshing in the baking heat.

The desert jerboa and the dorcas gazelle never have to drink any water at all. They consume it with their food. The fennec and the black-tailed jackrabbit do not only have their large ears for better hearing. When it is hot, they pump blood into their ears to cool down.

The addax antelope lives in the Sahara. During the summer months it has a bright white coat that hardly stores the heat of the sun. As temperatures can be as low as -10 degrees Celsius in winter, the addax antelope’s coat takes on a darker color to better absorb the warmth of the sun.

How do animals survive in the desert? During the day, many animals look for shelter in caves and crevices to get away from the heat. They sleep until night. Then they become active. Animals use waterholes to drink or take up liquids with their food.

Orangutans burp just before they attack.