If someone is talking about dolphins, you always think of the friendly smiling and joyfully squeaking grey marine mammal. Yet, there exist about 40 differently sized and colored dolphin species. The orca is the biggest and heaviest among them.

Why are Orcas Colored Black and White?

If you are under water and look up to the water surface, it is mostly rather bright due to the daylight. Thus, it is very difficult for preys and enemies to detect the white tummy of the orca. From above, all preys and enemies look at the orca’s black back, which can hardly be distinguished from the darkness of the deep waters. 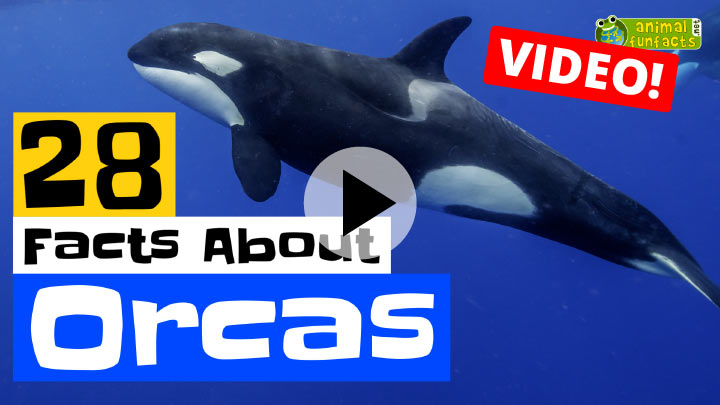 Orcas are very sociable and live in groups of 10 to 70 animals. They nearly always swim together and hardly ever part. Every group has its own dialect (a certain manner to utter sounds) to maintain their strong social cohesion. All members of an orca group take care of the young ones, no matter if they are directly related to each other or not. In exceptional cases, the animals can become up to 80 years old. Sometimes up to four generations are living together.

Orcas hunt in teams and apply many diverse hunting strategies. They confuse their prey with air bubbles, hit them with their fins to stun them and cut off their way. Orcas even catch prey from ice floes.

Why is the Orca Called „Killer Whale“?

The orca has been feared as a killer whale for centuries, although it is generally friendly and curious as far as humans are concerned. So, why is it called killer whale then? To begin with: The name orca derives from the scientific name Orcinus orca. The term “killer whale” probably alludes to the orca’s preferred food, which includes other whales such as small dolphins, minke whales, and gray whales. Therefore, fishermen called it “whale killer”, which became “killer whale” later on.

Lots and Lots of Grey Matter

After the sperm whale, orcas have the second largest brain of all marine mammals.

Orcas have a gestation period of 12 to 18 months. At birth, an orca calf already weighs 440 lb (200 kg) and is about 2.4 m (7.9 ft) long. Mother and child maintain a close relationship, which mostly lasts for their entire lives.

There are over one million kinds of insect.