Where Do Sloths Live?

Sloths spend almost their entire lives in trees. They have long curved claws that can get up to 3.9 inch (10 cm) long and allow them to hang on branches. In this position they do almost everything from sleeping and eating to mating and giving birth to their young. Only sometimes do they climb down a tree to climb up another one. Even dead sloths do not lose their grip and keep hanging on their branches.

Sloths Have Their Fur Parting on Their Back

Most other mammals have their fur parting on the head or the back. The sloth has his on the belly instead. This way the rain runs off better, when hanging upside down in the tree.

Insects Live In a Sloth's Fur

Does your head itch? Everybody who has had lice will never forget this awful experience and shudder when thinking about it. The sloth takes it easy: Moths, bugs and other insects live in its fur. Even algae are growing there, which make its coat look greenish and serve as a perfect camouflage in the rain forest.

Sloths have additional vertebrae of the neck, which enable them to rotate the head up to 270 degrees. This helps them to reach more leaves without having to move.

The sloth spends 15 to 20 hours a day sleeping. As sloths can get up to 40 years old, they spend nearly 34 years of their lives sleeping. Because the sloth moves so slowly, you often cannot be sure if it is awake or taking a nap.

Why Do Sloths Climb Down the Tree?

From time to time sloths leave their tree. Three-toed sloths climb down to "do their business". But this is not the main reason. They could just drop their feces while hanging on the tree. At least that's how the two-toed sloths do it.

The three-toed sloths climb down, because they want moths to lay their eggs in the fresh droppings. These serve as food for the larvae. By doing this, sloths don't act out of selflessness. They want the adult moths to settle in their fur. The insects provide nutrients that allow algae to grow in their fur. These algae are a tasty, digestible snack for the sloth.

How Do Sloths Move On the Ground?

The legs and arms of the sloth are not made for walking. In order to move on the ground, it hits its front claws into the ground and slides forward on its belly. This looks rather clumsy and quite different to Sid, the sloth from Ice Age!

How Do Sloths Defend Themselves Against Enemies?

On the ground, sloths are an easy prey for all their enemies. Life in trees is also dangerous, e.g. due to big cats such as the jaguar. Yet, the sloth does not remain motionless, but defends itself using its sharp claws and teeth. Serious injuries do not bother the sloth. Deep wounds hardly ever become infected and heal within a few weeks.

You might think that sloths swim as slowly as they move ... and drown instantly. Yet, the opposite is the case. Sloths are very good swimmers and move forward doing the crawl with their arms. Sometimes they let themselves fall into the water directly from their trees.

Sloths Have a Low Body Temperature

Until about 10,000 years ago there lived giant ground sloths that were as big and as heavy as elephants. However, they did not live in trees, but on the ground and could stand on their hind legs like bears.

The Sloth Is Related To:

Animals in the Same Biome: 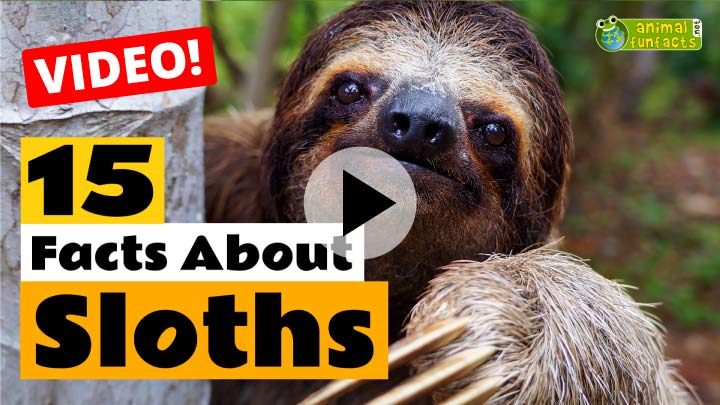