The great spotted woodpecker is hammering all the time, but it does not need painkillers and does not suffer from brain concussion. A kind of suspension between its bill and skull protects the bird so that it can hammer all day long. 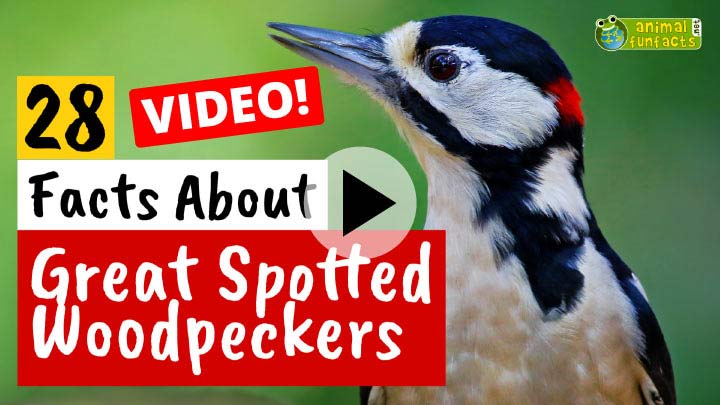 Why Does the Woodpecker Hammer?

There are four reasons:

1. It wants to create a little cavity in the tree for nesting.

2. It is looking for insects, which are hiding under the bark of trees.

3. It wants to attract female woodpeckers. This is also called “drumming”, because the great spotted woodpecker uses its bill to very quickly perform about 10-15 blows on a trunk or branch.

4. It defends its territory, even when drumming.

As soon as the woodpecker starts drumming, the wood chippings fly everywhere. Little feathers cover its nostrils in order to prevent the chippings from getting stuck in its nose.

The woodpecker loves its self-made home, but it usually does not like to stay there for longer than a year. It moves on to build cave after cave. The old ones can then be used by tits, starlings, and even owls (if the cave is big enough).

The great spotted woodpecker likes to eat nuts, and it has a special way of cracking them. While other birds hold nuts steady with their feet, the great spotted woodpecker sticks them into a crack or hole in a tree. This makes sure it doesn’t roll away, so it can comfortably peck at it until it reaches the tasty treat in the center. These holes or splits in trees are called “anvils”.

Great spotted woodpeckers have very long tongues. After having hacked little holes into the trees, they insert their tongue to catch the insects inside. They also use their tongues to slurp tasty nectar.

In 1997, the woodpecker was Bird of the Year in Germany.

All woodpeckers use the same flight pattern: They flap their wings three times and glide along.

The great spotted woodpecker lays 4-7 eggs which are hatched for 11-13 days. The little baby woodpeckers are fed by their parents for 3-4 weeks before they start their first attempts at flying.

The duck-billed platypus and the echidna are the only mammals that lay eggs.