8 Animals That Recognize Their Reflections

How to Find Out if an Animal Recognizes Its Own Reflection

Because animals can’t speak like we can, we can’t just ask them. The following trick is used by most scientists: The animal is marked with colored dot somewhere it can’t see. Like on its forehead or back. The animal is then sat in front of a mirror. If the animal tries to get rid of the colored dot, or touches it, it means: the animal recognizes that it’s them in the mirror. By the way: famous natural scientist Charles Darwin came up with the idea behind the mirror test in 1838 as he was watching an orangutan. In 1970, psychologist Gordon Gallup Jr developed the test further.

The Mirror Test Has Its Limits

What if the animal recognizes itself in the mirror but just doesn’t care about the colored dot? Lots of animals rely on their senses of smell and hearing, so their vision isn’t as important. In this case, the test would deliver a false negative.

Self-Awareness and „Being Aware of Yourself“

When you are convinced of yourself and your abilities you are self-confident. But being self-aware has a slightly different meaning. It means that you are aware of your own feelings, wishes and thoughts. 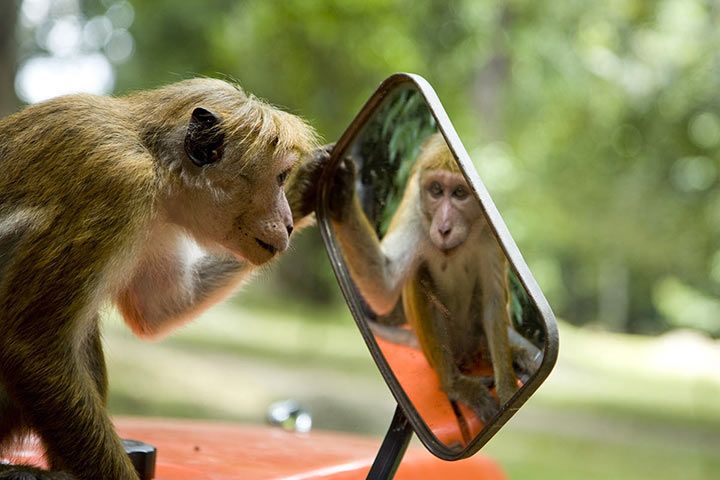 Monkey is looking in the mirror - Photo: peters99/Shutterstock