Both predatory and prey animals disguise themselves - with the help of colors, patterns, by imitating objects or even other animals! Why are they doing that? This video explains different types of camouflage in the animal kingdom. 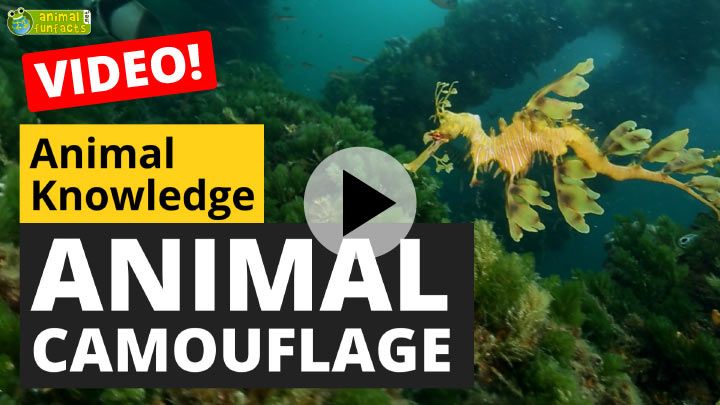 How do animals disguise themselves in order not to be detected by prey or predators?

Many animals match their background to avoid being discovered by predators. For example the snowshoe hare matches with the snow. Or the green frog the green moss. The doe is just as gray-brown as its surroundings and the crab spider is as white as the flower on which it is sitting.

Find out more:
12 Animals that are Masters of Disguise

Some animals use dots, stripes, or patterns as a camouflage. This way it is much more difficult to recognize their outlines. For example, the leopard. And the owl. Sea turtles also have confusing patterns on head and legs. How does this work for the zebra? In a herd of zebras, individual animals are difficult to recognize. Yet, the stripes do not primarily serve as camouflage. Scientists have found out that they help to keep away mosquitoes, make it easier to handle the tropical heat and enable the animals to identify each other.

Some animals imitate objects. A twig, for example. You won't notice that there is a leaftail gecko until it starts moving. The leafy seadragon imitates seaweed. By the way: The word mimesis is a Greek word meaning “imitation”. The octopus can match the color of rocks and corals within seconds. It changes its color from a bright red to an unflashy gray-brown. These animals are true magicians!

Some animals imitate other dangerous, poisonous or inedible species. One could also say they are sheep in wolf’s clothing. For example, hoverflies mimic the look of wasps. This mimic octopus seems to consist of several dangerous water snakes. If an animal imitates another one, this is also called mimicry. This crocodile fish, for instance, looks like a dangerous crocodile, but it is absolutely harmless.

Ghost insects look like leaves. Some like juicy green leaves, others like dried leaves in autumn. Walking sticks imitate thin twigs, and often don't notice them until they are moving. Coral or seahorse? With some seahorses, this is difficult to determine. There are also camouflage artists among birds: The cuckoo for instance looks like a hawk, a dangerous bird of prey.

How do animals disguise themselves? They use colors and patterns, imitate objects or other animals.