Foxes are predators. They live in forests, grasslands, mountains, deserts or on the coast. The red fox is the most famous fox, but not the only type of fox. There are more than 40 other kinds of foxes, for example the arctic fox, the grey fox, the short-eared fox/bat-eared fox or the fennec. The fennec is in fact the smallest fox in the world yet has incredibly long ears!

Foxes are canines (belong to the dog species) but also resemble cats, which is characterized for example by being loners, by their slit shaped eyes or the typical “playing with the prey” behaviour.

What Do Foxes Eat?

Foxes like to eat small vertebrates, particularly mice, as well as squirrels, hedgehogs and geese. Sometimes they even polish off fish, frogs or worms. However, foxes are not purely meat eaters. They also savour the marvels of fruit such as plums and raspberries. 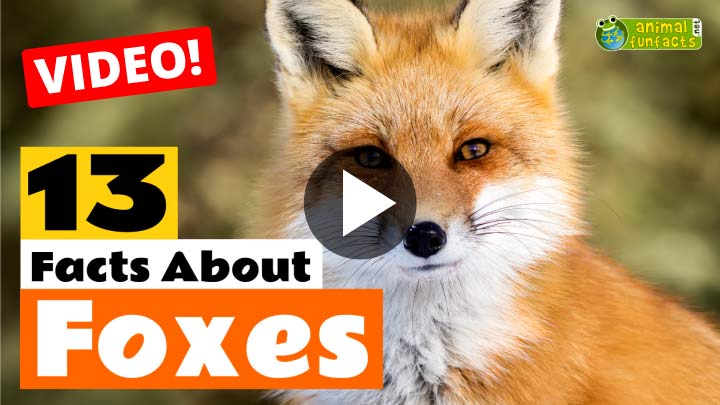 Foxes Use the Earth's Magnetic Field

Yes that's true. Foxes use the Earth's magnetic field to accurately determine the distance and direction of their prey. They are not the only animals that have a "magnetic sense". Sharks and turtles have it, too. With migratory birds one speaks of a "magnetic compass".

Foxes use their bushy tails not only to keep their balance while jumping or chasing, but also to warm themselves or even as a signal flag to communicate with other foxes.

A fox can run as fast as 30 mph (50 km/h) when chasing his prey. This is faster than permitted when travelling by car in town!

Fox vs. Hedgehog - Who Wins?

When a hedgehog curls himself up, he appears to be safe from any danger. From their own painful experience, dogs and cats can tell you a thing or two about scratched noses and paws. Our fox, however, has come up with a very cunning trick: He nudges the hedgehog very carefully with his paw, and rolls him into the nearest pond. The hedgehog is naturally not very fond of so much water. So, he uncurls himself and soaking wet, plods ashore - directly into the claws of the fox.

How Do Foxes Fool Crows?

Even crows and other scavengers fall into the trap of the proverbial sly fox: How? Quite simple, the fox lures them into the trap by pretending to be dead. After the birds have closely observed the motionless fox, they briefly peck him “as a test” to check whether he is still alive and quickly fly off again. After repeating this a few times and being lulled into a (false) sense of security, it is "dinner time".

However, not for the scavengers, but for the fox, who "awakens" from his "rigor mortis" and then snaps at his prey within a split second. For a long time, it was not actually possible to physically observe this trick, which was consequently dismissed as a popular folk belief. In the sixties, a wildlife photographer captured this moment on a photo subsequently turning this folk belief into a proven theory (Source: www.fuechse.info).

The Red Fox Is Related To:

Most snails have blue blood.