Cheetahs are large cats. They are considered the fastest land animals in the world and they are famous for their exceptional running technique, allowing them to make quick turns.

A Quite Unique Look

Solid black spots cover their fur and there are two vertical „tear“ streaks running down their face. This makes a cheetah look as if it would shed tears.

According to the IUCN (International Union for Conservation of Nature) there are three African and one Asian subspecies of the cheetah. Most cheetahs live in Africa, south of the Sahara.

No. The only cats that make up packs are lions.

Yes, but they can not climb as skillfully and not as high as other big cats, e. g. leopards.

Can a Cheetah Kill a Giraffe?

No. Giraffes are too big and too heavy for a small cheetah. It can't prey on large ostriches and zebras either. Those animals are even able to kill a cheetah with a powerful kick. 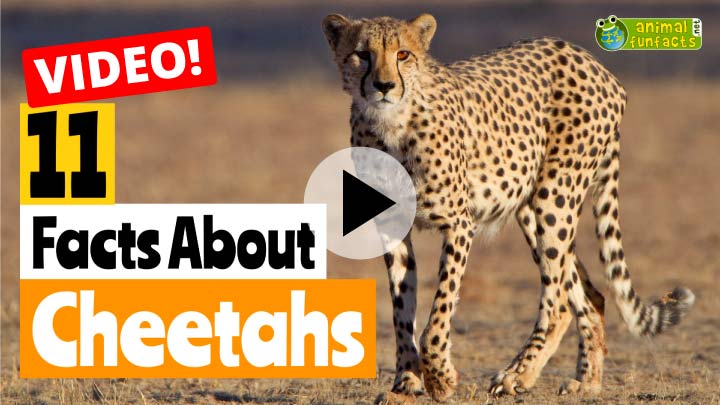 From here you find facts submitted by animalfunfacts.net fan L.R.! Do you want to write a fan fact sheet?

As we all know, cheetahs are the world’s fastest land animals. But what would it be like if you compared the sprint of a cheetah with the currently fastest human in the world, the Jamaican Usain Bolt? Bolt runs 328 ft (100 m) in 9.58 seconds. A cheetah also sprinted a distance of 328 ft (100 m) on a special course in the USA. The cheetah lady reached the finish line after terrific 6.13 seconds – much faster than the Jamaican star.

If the cheetah sights an antelope for instance, it creeps up to it up to a distance of about 328 ft (100 m). Thanks to its flexible spine, the cheetah reaches a stride length of up to 23 ft (7 m). Then the cheetah starts running and accelerates with lightning speed. The surprise effect helps it to gain precious time. If it hasn’t managed to catch up with its prey after about 0.24 miles (400 m), it has to give up.

If the hunt is successful, the cheetah runs into the legs of its victim to make it stumble and fall down. Then it grabs it by the throat with its teeth and smothers its prey. Then the cheetah has to rest, because the fast sprint otherwise could overheat its muscles. However, it also has to hurry up with devouring its prey, because the cheetah is unable to defend it against scavengers such as hyena.

A Runner By Heart

The cheetah is a real sprinter by nature. It has long and slim legs, a slim body, and a flexible spine that enable large stride lengths. Its nasal cavities, bronchia, and lungs are enlarged to be able to inhale a larger amount of oxygen more quickly. Its set of teeth is smaller and rather weak compared to other cat species.

There are only around 6,600 cheetahs living on this planet. The cheetah is registered as a vulnerable species in the red list of the IUCN.

One to three babies are born after 95 days. During the first eight weeks they stay well hidden in the thicket. This is important for their safety as their mother is unable to defend them against enemies. Silvery hair grows on the back of the little cheetahs, but they lose it within a period of about three weeks.

The buff-tailed bumblebee feeds on around 4,500 flowers each day - a regular bee only needs 150.