Video: Why Do Animals Team Up?

Many animals live together in a herd, a pack or a swarm. But why? Why do animals team up and live together in groups? In this video, you will learn more about animals that live in large communities and how they benefit from this. 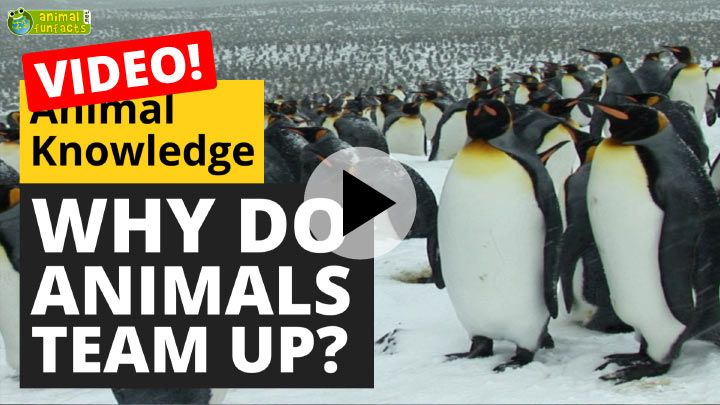 Why do Animals live in Large Groups?

Have you ever asked yourself why lions live in packs? Why birds form flocks? Or, why do thousands of bees live together in a hive? And why do ants live in gigantic colonies?

What are the Benefits of Living Together in Large Groups?

Many animals like to socialize with their fellow species. This increases their chance to survive. They keep each other warm, warn each other of possible dangers and defend themselves against predators. Or they take care of their offspring together. Searching for food is also easier in a group.

Example: Protection Against the Cold

In the Antarctic region temperatures can go as low as -130 degrees Fahrenheit (-90 degrees Celsius). An icy wind sweeping across the plains makes life even more unpleasant. Penguine huddle together in order to keep warm and not to die from the icy cold.

Adult hippos can weigh up to 4.5 tons and they have long, dangerous fangs. Therefore, they do not have many enemies. Their kids are not yet as good at defending themselves. Crocodiles, lions, and hyenas like to go after them. This is why hippos always stay together very closely when taking a nap. This enables them to warn and protect their offspring of approaching predators.

Meerkats have many enemies, such as birds of prey and wild dogs. Therefore, they have to be attentive all the time. While some of them gather food and eat, the others keep watch. As soon as a predator approaches, they start to whistle. Back into the den as quickly as possible!

Wildebeests live in the savannahs of Africa. When the grass withers at the end of the rainy season, they move north to find lusher pastures. Yet, to get there, they have to cross a big river. Hungry crocodiles are waiting there to get some wildebeest’s meat between their teeth. Moving in a group increases the chances for the wildebeests to survive.

Insects form large communities and states. A bee colony can consist of 40,000 to 60,000 bees. One single termite hill usually houses between 5,000 to 200.000 termites. Ants live in colonies of several hundred up to more than 20 million animals. In Hokkaido, Japan, there is a so-called super colony with 300 million ants.

Birds also often nest in large colonies. 2.5 million lesser flamingos. live at the Soda Lake in Tanzania. Penguins do not only huddle together in the Antarctic region. On Macquarie Island in the Lusitania Bay (Australia/Tasmania) penguins form a colony of more than 3 million animals.

Mammals also form large groups sometimes – not only gnus, hippos and meerkats. On Macquarie island there is a community of 80,000 sea elephants. 20 million Mexican free-tailed bats live together in a large cave in Texas (“Bracken Cave”).

Some animals prefer to stay on their own. They are called solitary animals. Examples are the giant panda, the rhino or the tortoise.

Why do animals live in colonies? Many things can be done in groups more easily! In groups animal can better protect each other from the cold, defend themselves against predators, look for food, or for possible mates. They help each other to bring up their offspring and learn from each other.

Video: Animals That Team Up - Roundup!

The duck-billed platypus’ bill is bendy. It feels like smooth leather.