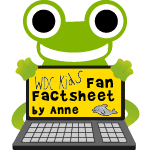 Whales At Our Coasts

The harbor porpoise can also be seen on Germany’s North Sea and Baltic Sea coasts. When it breathes out, it sounds like a sneeze. You can sometimes even hear it from the beach when the sea is quiet. They are also called the common porpoise, while fishermen sometimes call them “puffers” or “puffing pigs”.

The harbor porpoise’s body is relatively short and powerful with a small head. Unlike dolphins, harbor dolphins don’t have long noses (beaks). They also have funny black markings on their lips and chins. The porpoise’s back is dark gray, and even black in some cases. Their bellies are light gray to white. Their dorsal fin is triangular, while their pectoral fins are small and round.

Harbor porpoises are very shy and prefer to keep away from humans. They can sometimes be seen from quiet boats or even from the coast. They don’t jump like dolphins, they just quietly glide through the water. Most swim around on their own. But sometimes, you can see a mother with her calf. Very occasionally, they form groups of up to seven animals. Unlike people, harbor porpoises don’t sleep for several hours in a row. They prefer to take several short breaks, where they relax on the surface for a few seconds.

Threats in the Baltic Sea

The harbor porpoise has no natural predators in the Baltic Sea. Their biggest threat comes from humans. There are lots of fishing nets, which porpoises find it hard to spot. This leads to them getting caught and drowning. Increasing marine pollution is also a threat. Today, the Baltic Sea is the dirtiest sea in the world. There is also a lot of noise in the water of the Baltic Sea. This disturbs the porpoises.

This factsheet was submitted by animalfunfacts fan Anne, who wrote it for the WDC Kids writing competition. Thanks for your amazing article!