There are many Spitz breeds: Wolfspitz/Keeshond, Giant Spitz, Miniature Spitz, Asian Spitz like the Akita, the Chow-Chow, the Shiba-Inu or the Samoyed. This pet profile is especially about the Pomeranian, also called the German Zwergspitz (German Dwarf Spitz). There is hardly anything cuter than a Pomeranian! Is looks like an adorable little fox and has a wonderfully soft and fluffy coat that you want to stroke all day long. Please take care that your Pomeranian is always safe from becoming overheated, especially in summer! Its coat is not only dense but also very warm. The dogs should always have access to a shadowy place to cool down whenever they need to.

The Pomeranian is good with children. Also, this dog is very friendly, cheerful, attentive, curious, lively and smart. But it does not get along well with other dogs. For some reason, it is not aware about its own size, or it is so bold that it just doesn't care. However, while in a park chances are that it gets into a fight with a larger dog. Watch out!

Pomeranians love toys and it is great fun for them learning tricks. They actually love any kind of exercise. Just don't let this dog get bored! Agility is also great for Pomeranians, because it challenges them physically and mentally. They are also suitable for inexperienced dog owners, and they get along well in an apartment, too. Of course they need - as does every dog - regular exercise. Additionally, the Pomeranian needs careful and diligent education, preferably a dog obedience school. Why? It tends to bark, which can get really annoying - for you and for your neighbors.

The Pomeranian is one of the smallest breeds of dogs. It has a sweet little face with dark button eyes and a very dense and fluffy coat. It comes in many colors.

Its coat needs to be combed or brushed often to keep it soft and fluffy and to avoid matting or knots.

Who would have thought that Spitz breeds were used to pull sleighs and guard herds! In former times, they were much bigger than they are today. From the 19th century on, the pretty dogs were bred smaller - so to become family and companion dogs.

Where Does the Name Come From?

The dogs were bred in Pomerania, a small region in northeastern Germany. Pomerania derives from "po more", is actually Slavic and means "land by the sea". Concerning the term „Spitz“: we have not been able to find out yet! Most Spitz breeds have pointed ears, but not all of them. If there is anyone out there knowing the answer: Write us a note!

The Austrian composer Wolfgang Amadeus Mozart dedicated one of his compositions to his Pomeranian "Pimperl". The Polish composer Frédéric Chopin and the Italian painter Michelangelo also had a Pomeranian. 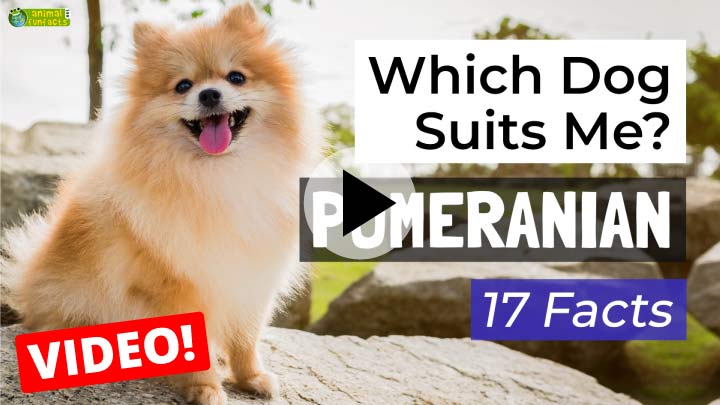