The Labrador Retriever is one of the most popular dog breeds, because they’re so very friendly and easygoing. They’re everyone’s favorites, animal or human. Labradors need a lot of exercise, and love playing fetch and swimming. In water, Labrador Retrievers use their tails like rudders to steer themselves. Their tails are even referred to as “otter tails”. This water-loving pooch even has webbed toes! They love learning, so it’s easy to teach them tricks.

Labrador Retrievers are particularly suited to beginners because they’re easy to train - although they’re so big and heavy! They’re interested, learn quickly and are happy to carry out commands issued by humans. This doesn’t mean that these dogs will manage all of this on their own - they don’t come with their own set of rules. Training and clear, firm leadership is essential - as with any dog - and forms the basis for a harmonious life together.

The Labrador Retriever stands upright, proudly and confidently. They move elegantly and their body language is friendly and peaceful. Their almost rectangular bodies are powerful, with strong muscles. They have thick, short, straight fur. The surface is slightly wiry to keep water out. Their thick, soft undercoats make these dogs “waterproof”. This protects them from the wet and cold.

The Labrador Retriever is a robust dog that isn’t even afraid of bitterly cold water. As long as there’s something to fetch. The water drips from their fur quickly, and their low-maintenance fur usually only needs brushing once a week.

The Labrador Retriever originally came from Newfoundland, a province of Canada. They were called St. John’s Dogs at first, after the capital of Newfoundland. They were hardworking, reliable partners and helped fishermen with their work by pulling nets or ropes in the water or catching fish that had escaped from the nets. They came to England in the 19th century, where they were given their new name and bred as hunting dogs. From here, the Labrador Retriever won over the whole world with its friendly character.

Where Does The Name Come From?

Labrador is a peninsula in eastern Canada, part of the provinces of Newfoundland and Quebec. “Retriever” hints at their love of fetching.

Labrador Tubby made it into the Guinness Book of World Records in 2010 for collecting 26,000 discarded plastic bottles with his owner over 6 years. Respect! Labrador Boxer cross Jimpa holds the record for “furthest distance tracked by a lost dog”. In 1979, he traveled 2000 miles (3,218 km) through Australia (from Nyabing to Pimpinio) to get back to his owner 14 months later.

Video: Is a Labrador Retriever the Right Dog Breed for Me? 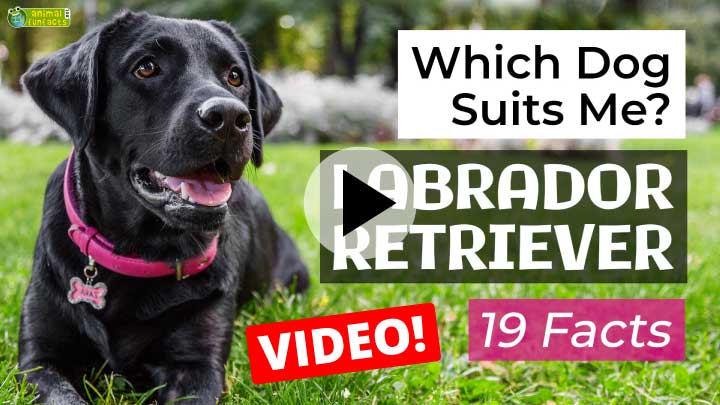