The French Bulldog loves its role as a lapdog. They love cuddling up with their humans, and even enjoy a nap with their master and all the family. They love to play the clown and will entertain the whole family.

The French bulldog is small, short and powerful. Their fur is short, and the skin around their shoulders and head forms adorable folds. The two button eyes in their square, pug-nosed faces look at the world with curiosity. Their special features are their upright "bat ears". These are passed down through breeding. In contrast to the English Bulldog, the French Bulldog moves more freely and more lightly.

French Bulldogs aren’t known for their ability to join their humans on 5-mile jogs (you’d be better off with a Jack Russell for that). But you should make sure they get enough exercise, as they have a tendency to put on weight. Their fur is easy to care for, and doesn’t require regular brushing. Important: these dogs are very sensitive to heat. They especially need cool, shady spots in the summer to relax in.

The French Bulldog comes from France! Right? Well, yes and no. Let’s start from the beginning. Bulldogs were very popular around Nottingham (England) at the beginning of the 19th century. Some were brought by workers to France, where they were popular rat catchers.

But they soon caught the eyes of the aristocracy and the rich. The ones with upright ears were especially popular - which had not been the case in England. The bulldogs with this characteristic were bred on (and sometimes crossed with breeds such as terriers and pugs) to create the French bulldog that is now loved all around the world.

But where does the name come from? Why "bull" dogs? It must have something to do with bulls, right? Right. People used to make them take part in fights. The dogs were set on bulls for entertainment.

What’s the difference between the French and the English Bulldog? It’s clear to see that these two dog breeds look quite different. So why are they both called bulldogs? It would be better to discuss what they have in common rather than any differences.

French Bulldogs actually come from the English ones. In the Middle Ages, English Bulldogs were used in fights. After this was banned, there wasn’t much call for these dogs but interest in a smaller, cuter and calmer “version” grew. That’s where the French Bulldog came in.

They say that French Bulldogs sink like stones. They can’t swim well at all, as their little legs aren’t built for kicking and their heads are very heavy.

Video: Is a French Bulldog the Right Dog Breed for Me? 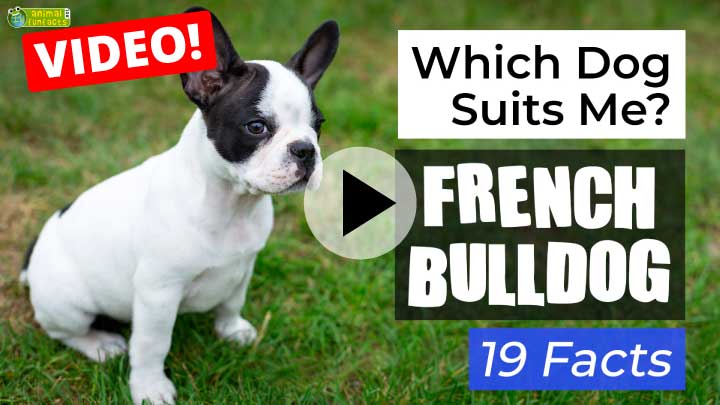