German Shepherds are extremely adaptable, super athletic and loves challenging tasks. It can be well trained to help people e.g. disabled people or people in need (like avalanche victims). One thing’s for sure: they definitely need a task, a mission, a job. In the US, the German Shepherd is No. 2 in the most popular dogs - according to the American Kennel Club. It is No. 4 this year, after being No. 2 for more than 5 years now. It was even more popular than the Golden Retriever and the French Bulldog (2019). There is one thing you definitely have to know: It sheds all year round. And it destroys things when bored.

The German Shepherd is exceptionally smart. They're considered the third smartest dog breed, right behind the Border Collie and the Poodle. It’s not hard to train this dog and teach it commands. It very quickly understands what you want from it, and can put this knowledge to use after just a few repetitions.

Still: training is not something that you have to “get out of the way” when your dog is a puppy so you can sit back and relax. As German Shepherds tend to have a very strong protective instinct, owners must constantly make sure that these dogs don’t overstep the line. You have to regularly practice to make sure they don’t put a paw wrong.

Although the German Shepherd is considered to be very loyal and very reliable, it is suspicious of strangers and other dogs. You have to make sure that this won't be a problem. From all the dog breeds presented here the German Shepherd must be socialized the most.

What does "socializing" mean? Is is essential that dogs (in this case Shepherds) are exposed to other puppies and strangers regularly at an early age. This is how they learn not to develop fear and aggression towards other beings. These experiences can not be made up in adulthood - no matter how much love and good training it gets.

The German Shepherd is very muscular and athletic. The most common coat colors are black, black and cream, black and red, black and silver, and black and tan.

The shepherd dog sheds a lot, which is why you often have to clean up its hair. Luckily, its grooming is easy. It is best to brush its coat two to three times a week so that at least part of the hair gets stuck in the brush and does not spread in the apartment.

A breed standard for German Shepherds exists since 1891. After the First World War, the dog was renamed because the word "German" was unpopular. It was renamed to Alsatian Wolf Dog and then Alsatian Dog (because it sounded less wild). It was not until 1977 that the German Shepherd Dog got back its name. And where Does the Name Come From? The dog used to be a sheepdog.

In the animation adventure "Bolt", Penny's "Super Dog" Bolt is a German Shepherd.

Video: Is a German Shepherd Dog the Right Dog Breed for Me? 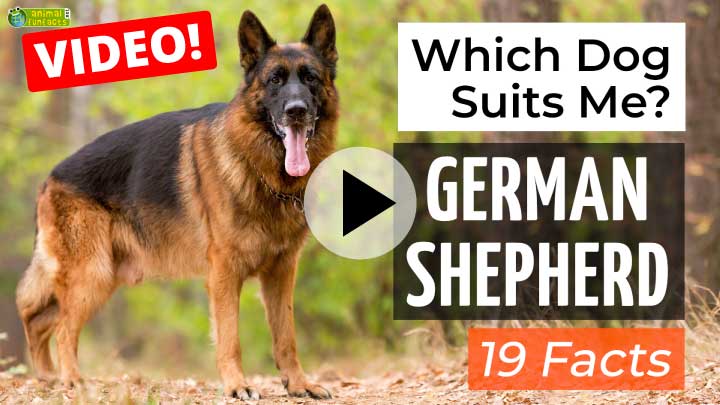